Being a non-swimmer and somewhat unsure of myself on water, it was with more than a little trepidation that I accepted an invitation to take a trip with Bluewater Adventures on an expedition yacht, but such was the draw of the area – the Great Bear Rainforest – it was not one I was going to turn down.

Day one, Saturday, started with my Hawk Air Dash-8 flight from Vancouver to Prince Rupert –  the airport is on an island – and then transfer to our boat, the Island Odyssey. Our cabins are small but comfortable and I’m on the bottom bunk, sharing with a great travel friend of mine. We had an orientation of the boat and meeting the crew before we actually set sail – and I mean with the sails up – and it was amazing. Blue skies, and the most incredibly serene views; just miles of water and trees and so wonderfully quiet. Without the engine, all you could hear was the lapping of the water, the wind in the sails and the chatter and laughter of the group. The group was a good mix; as well as four Brits, there were three Aussies, an Austrian, a Swiss lady and the Canadian crew. 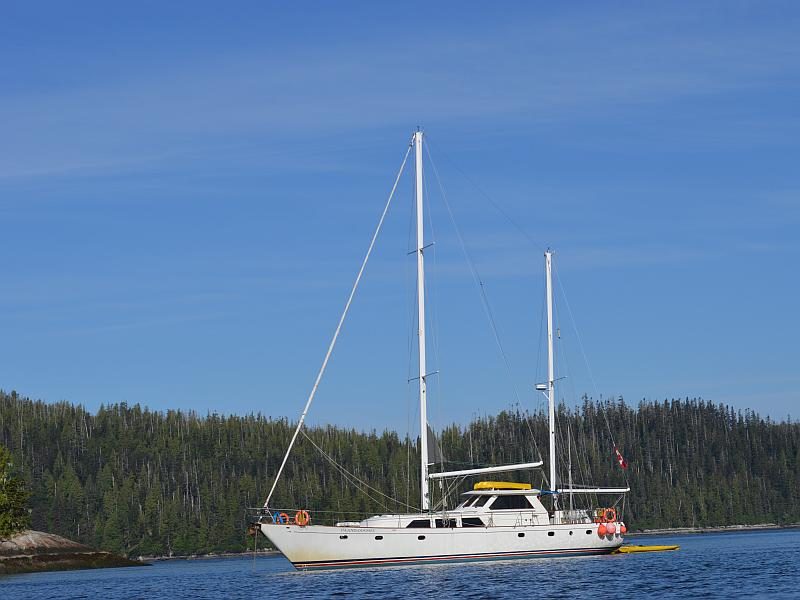 Home for the trip – Island Odyssey

The food was the other highlight; the first afternoon snack was a mix of goats’ cheese, pesto and almonds served with crackers and fruit, and dinner – washed down with an excellent red wine from British Columbia – was salmon served with a wild rice mixed with apricots and berries, fresh asparagus and salad. It was Erin’s (from Bluewater Adventures) birthday which was celebrated with the most amazing chocolate cake (made from black beans and cocoa powder that even non-chocolate lovers would enjoy) and all done in a kitchen smaller than a box bedroom.

We laid anchor in the most spectacular setting and retired to our cabins after doing a round robin introduction about ourselves and what we wanted from the trip and our likes and dislikes. I admitted my fear of water but said how I did not feel any apprehension whatsoever on board and after, as I lay in my silent bunk beneath the porthole, with the gentle rocking movement of the boat and the sound of the water, I felt very at ease.

Day two started with some going for an early paddle; something I was determined to do, but not right away. After a wonderful breakfast of scrambled eggs mixed with brie, served with bacon alongside fruit and yoghurt, we took Zodiacs to a wonderful small island, a part of the Connell Islands, with a sandy beach scattered with logs. One side, where the zodiac was moored was quiet and flat while the other was rolling pacific with huge waves crashing on the rocks.

We wandered on the beach and Lyndsey, our naturalist, showed us wonderful invertebrates ranging from brightly coloured sea stars to odd jelly-type creatures that appeared to gently kiss your finger. We scrambled up the bank flanked by beautiful wild flowers including red paintbrush and the orchid-like, few flowered shooting star. However, that was nothing compared to the view from the top; watching out from a bed of wild flowers over the rugged Pacific with a pair of bald eagles flying overhead in the cloudless sky was a memory to savour. 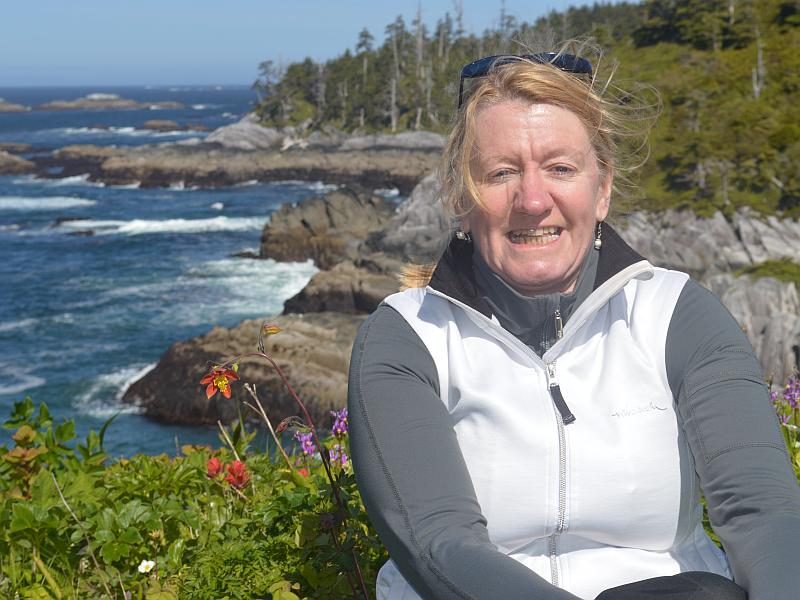 The rugged coast and flowers of the Connell Islands

I was on the second zodiac to return to the boat and we went via a large island-like rock which was home to other wonderful creatures including a beautiful purple anemone, the wonderfully-named gumboot chiton and a member of the nudibranch family, the Monterey sea lemon. 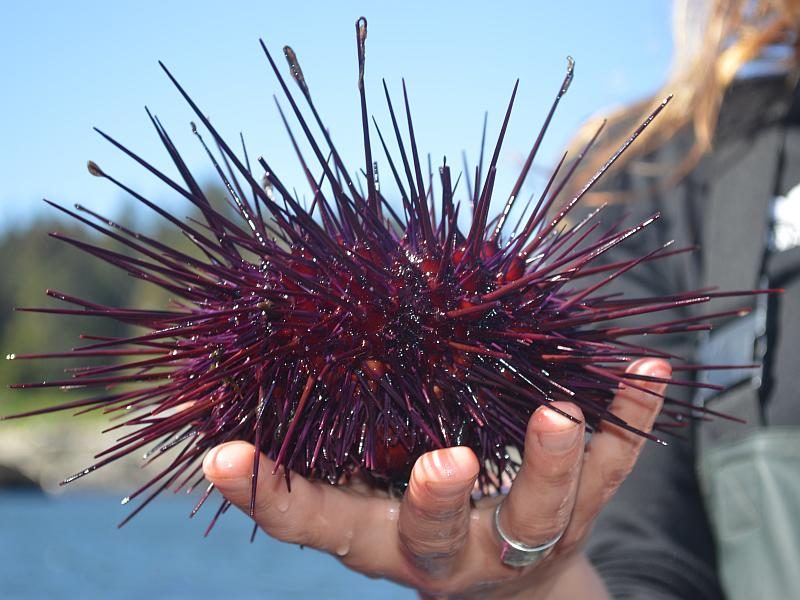 We then headed off further into Chatham sound, with the aim of getting closer to the Khutzymateen (pronounced K’tzim-a-deen) grizzly bear sanctuary, which in 1992 became the only protected grizzly bear sanctuary in Canada. With several pairs of binoculars trained on the sea and the shores, a pair of dall porpoises toyed with us and raised our expectations.

After more of Amy’s wonderful food – salmon chowder, pitta bread and hummus – we continued our search and were very soon rewarded with a pod of killer whales. Elusive at first, we started to spot more and more and the final count was probably seven. There were at least two large orcas and some smaller ones and there was much excitement every time a head was raised or a blowhole seen. We didn’t really see the whole of one but one did come up quite close to where I was on the boat, much to my surprise. They seemed to be almost playing hide and seek with us and we were certainly all enjoying the game.

We finally moored up in the Kwinamass inlet and our day was made by our first grizzly bear sighting. He was a little way away from us but built the excitement for the following day in the Khutzymateen. After another amazing meal of lamb and garlic roast new potatoes, I retired to my cabin feeling very content.

Day three started for some with another early paddle (no, not yet…) but soon after breakfast (muffin-tin eggs wrapped in bacon) we took to the zodiacs once more to explore the shoreline, searching for bear tracks and signs of inhabitants. We found recent, deep tracks from bear stomps (making their marks deep in the earth and striding purposefully) as well as bear scat on the beach. We headed back to the boat and headed further in to the Khutzymateen Inlet, having had an orientation on the sanctuary and bear behaviour, which was followed up later by a visit to the ranger station too. More wondrous food followed – others had a tomato soup while Amy made me a tasty, healthy toasted sandwich accompanied by the same avocado and prawn and the tastiest cookies.

After lunch, we headed out in the zodiacs to embark on our afternoon bear adventure, not even imagining what we were going to see. Our first encounter was with the bear we had seen the previous evening but he didn’t stay long so we continued our stealthy journey and were soon rewarded. A lone male was happily eating sedge grass which meant that Neil, our skipper, was able to expertly guide the zodiac within about 10 feet of this magnificent creature. He was oblivious to us watching him and was happily munching away while cameras clicked and whirred around him. I have never been so close to a bear and it was fabulous to observe his features and his movement in complete awe. 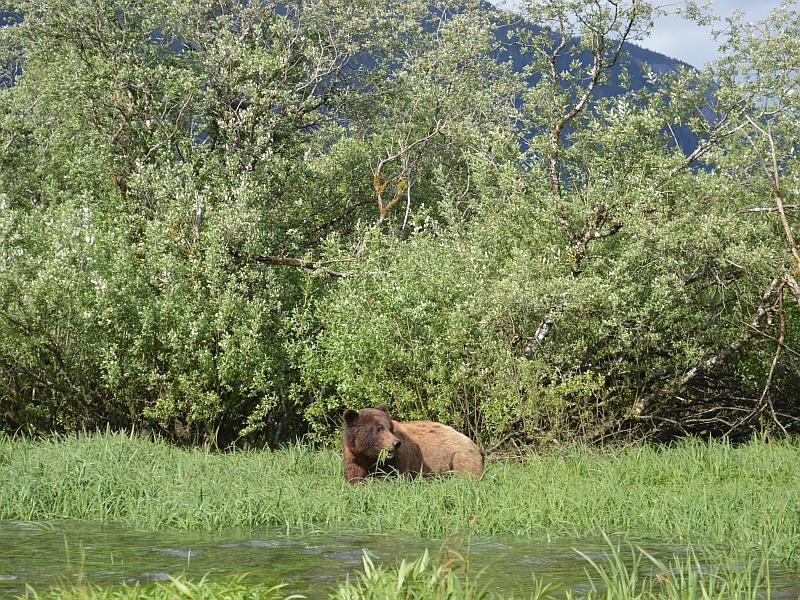 Yet more was to come; a mother and a cub were on a shoreline but again their visit was brief. A little further along however, we encountered a male and female having an altogether different encounter; we were there in prime mating season… Another male then appeared and got between the two of them, the female seemed to hardly care that she had another suitor and they made their way up the mountainside, aware of each other but keeping some distance. You could say she was playing hard to get… They sat, stood, rolled and laid down by a waterfall and it seemed an age before they began to move again. Such a fascinating encounter. We returned to the boat on an extreme high and dinner was very much served on the wave of that high and an earlyish night.

Our last full day started with quite an early departure as we had quite a long way to travel and on quite a windy day. We came across another pod of killer whales and we actually saw one breach which was so amazing; sadly not captured on film but an unforgettable sight. It was a very full-on sailing day because of the weather and we seemed to spend much of the day on our side. Having been advised the best place to be was on deck and I did feel better for that, I believe. We came to a stop eventually at Lucy Island and were able to be on terra firma which, to me, was a good thing. The island was tropical in looks, albeit with a cool wind, but once again, plenty of sun. Lots of rocks and logs made for lazy exploring and it was a very calm antidote to the strong winds and high waves of earlier. A self-timed group photo didn’t quite go according to plan when I dropped and broke my small point and shoot camera (luckily not my borrowed Nikon SLR) but we all left the island in high spirits. 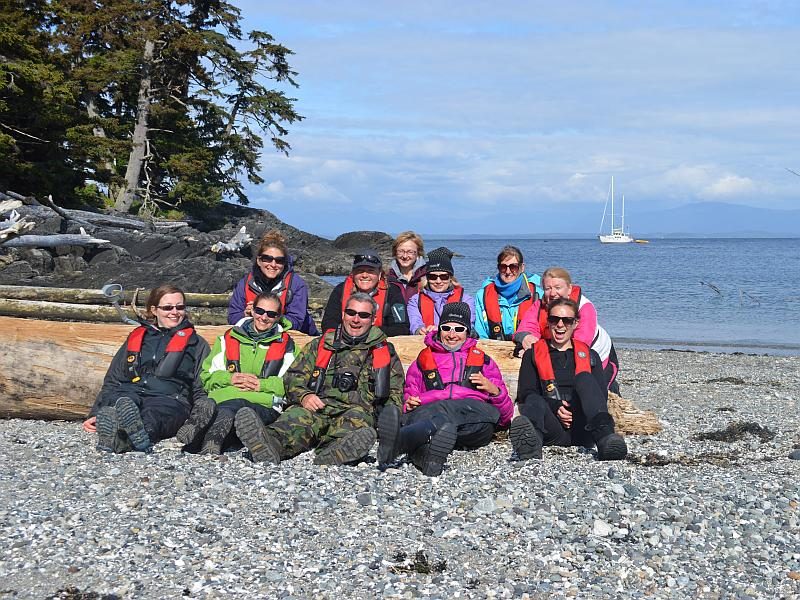 I had time for my first shower since boarding the boat on Saturday before our final Amy-cooked dinner (an incredible Thai red curry) and it felt great to have clean hair, albeit naturally dried and non-straightened… Dessert (another yummy cake with berries) was served with a wishing stone, with mine the first to be served. Lindsay and Amy had taken note of a rock that I’d said I liked so they made sure I got it. I was given another to throw overboard (as is the tradition) so I got to keep ‘my’ one. The wine flowed quite freely and the Brits stayed up with the skipper for longer than the others, all enjoying each other’s company, not to mention the wine…

Despite that, and a restless night, I was up at 615 and ready to go for the long-awaited paddle. A double kayak was made ready for me and my buddy Liz, so we headed out. She told me how to hold the paddle and what to do and I felt calm, relaxed and most of all, safe. It was lovely to be out in the quiet waters, enjoying the serenity; the perfect almost end to what really was – without wanting to sound cheesy – a voyage of discovery for me. 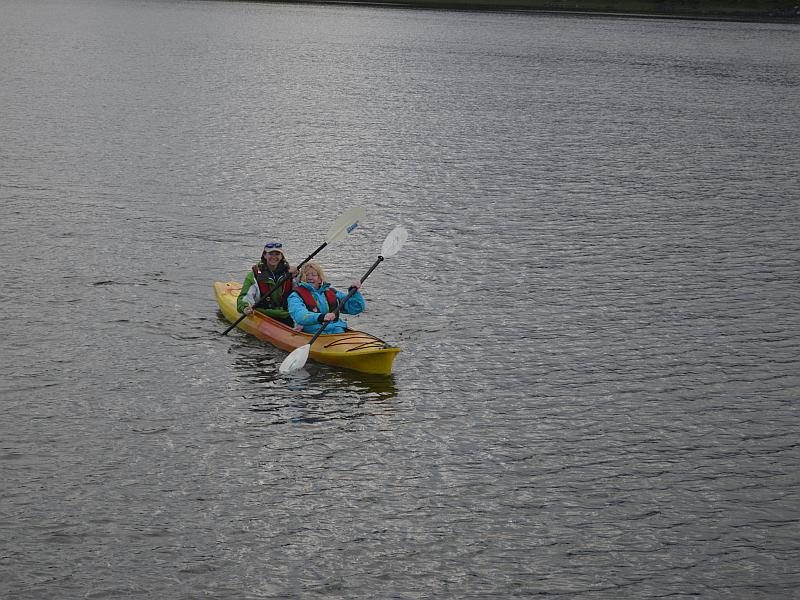 Our final shore excursion (after eggs benedict to die for) was with an elder from the Tsimshian tribe who took us to see the petroglyphs; astonishing carvings in the soft rock, ranging from eyes and mouths to a 5-foot plus full body.

The final hour or so on board was a mix of hurried packing and sad goodbyes. We were all invited to say what the trip had done for us, and each and every one of us enjoyed it immensely. I got a little choked saying my bit as I’d talked about my water fears and loved that these people I’d only just met, for the most part, were almost as proud of me as I was myself. Indeed, my first kayak was put on our ‘cool things’ wall by Elaine, one of my Aussie companions. Hugs all round for the crew led to our last zodiac ride for our short bus journey to Prince Rupert airport.

I had been so anxious at first of the boat, the time on water and being totally out of touch, but I did it and survived. Not only that but I gained so much from the experience that I am so pleased I took the plunge and did it. So much so, I told my fellow travellers that I was going to finally book swimming lessons when I got home… Watch this space…